How Brazil Pharmaceuticals Market Is Positioned?

Pharmaceuticals industry in Brazil had begun to evolve in the early 2000’s with the entry of Generic Drugs in the country. Moreover, in 1990, the Brazilian government also installed their free Universal health system (SUS) for the Brazilian population. In 1996, Brazilian patent law was introduced which led to substantial investments in the improvement of operational infrastructure in the country. 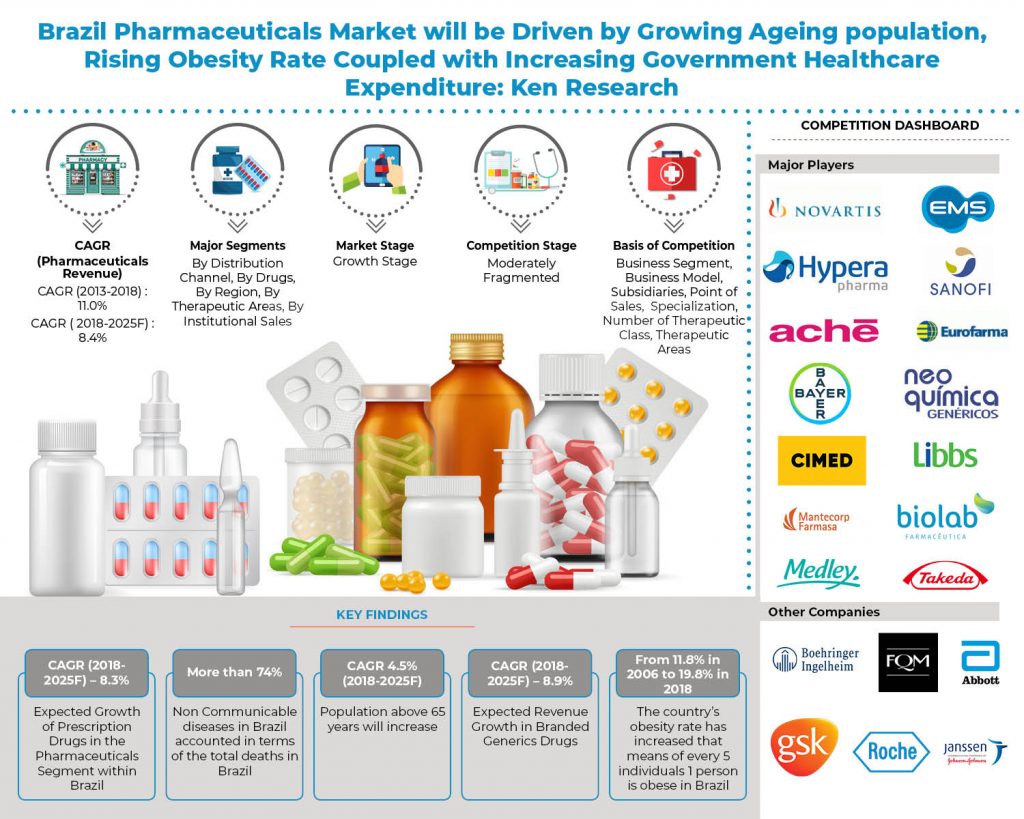 The market has been observed to be at the growth stage, owing to the presence of many international and domestic pharmaceutical manufacturers in Brazil. The industry is booming with the Universal Health System (SUS), growing elderly population (Above 65 Years) and growing investment in R&D for new drugs in Brazil. The reported number of death cases due to cardiovascular disease and Cancer accounted for the highest percentage share of ~% and ~% respectively in the proportion of total mortality due to different diseases in the year 2016.

Growth in Pharmaceuticals industry declined from ~% in 2014 to ~% in 2015 due to the economic crisis that happened in 2015. However, the economy is still in its recovery stage in Brazil.

By Type of Companies

Retail channel accounted for the highest revenue share of ~% during the year 2018 in terms of revenues largely due to the number of retail outlets present in all the regions including the underserved areas of Brazil.

By Type of Drugs

Prescription Drugs in Brazil accounted for the highest revenue share of ~% in the year 2018 largely due to the high prices of drugs that are majorly patented drugs and their availability for almost all chronic diseases prevalent in Brazil.

Southeast Region in Brazil accounted for highest revenue share of ~% in 2018 largely due to the number of hospital and retail pharmacy outlets in that region. In 2018, South region is the second highest region with ~% share in terms of revenue followed by South, Midwest and North.

How Is The Competitive Landscape Of Pharmaceuticals Market In Brazil?

The companies in Brazil are operating in different business segments with direct and indirect distribution channels and different Point of Sales in almost all the regions of Brazil.

For more information, refer to below link: