Osseointegration is critical for stability of implant and an important factor for implant loading and long-term clinical success of end osseous dental implants. Osseointegration acts as a direct structural and functional connection between ordered, living bone, and the surface of a load-carrying implant. The implanttissue interface is an extremely dynamic region of interaction. The processes of osseointegration are extremely complex, and several factors influence the formation and maintenance of bone at the implant surface. This process involves an initial interlocking between bone and implant, and subsequently, biological fixation through continuous bone apposition and remodeling toward the implant.

The major driving factors of the global osseointegration implants market include supportive reimbursement policies provided by insurance companies, rise in number of joint replacement surgeries among geriatric population, and surge in adoption of minimally invasive surgeries. Moreover, increase in adoption rate of advanced implant technologies such as osseointegration is expected to fuel the market growth. However, risks and complications associated with the implant are the factors anticipated to hamper the market growth during the forecast period. Conversely, presence of untapped market in the emerging economies is expected to offer remunerative opportunities for market players.

Based on product, the osseointegration implants market is bifurcated into dental implants and bone-anchored prostheses. The dental implants segment is projected to grow at a high CAGR during the forecast period, owing to increase in prevalence of dental disorders and rise in awareness toward the availability of dental implants as a tooth loss solution. Moreover, ongoing R&D on dental implant techniques, designs, and materials has improved in the recent years. 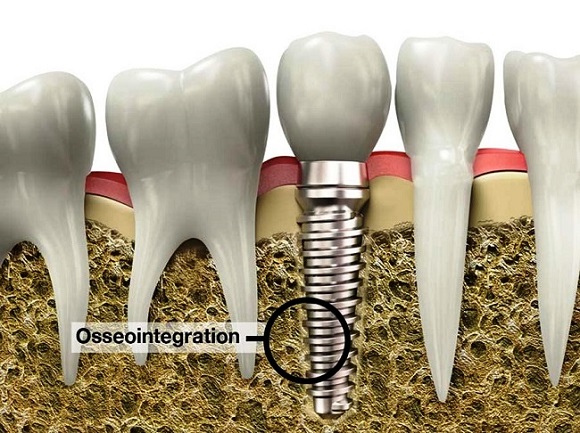 Based on end user, the osseointegration implants market is categorized into hospital, ambulatory surgical centers, and dental clinics. The hospitals segment is expected to be the largest contributor to the osseointegration implants market during the forecast period. Dental clinic is preferred choice for dental implant procedures, owing to cost advantage over hospitals and ambulatory surgical centers, making it the largest contributor toward the market growth. In addition, the presence of full-time dentists and sophisticated dental infrastructure are expected to boost the segment growth during the forecast period.

North America was the leading revenue contributor to the global osseointegration implants market in 2017, and is expected to remain dominant throughout the forecast period. However, Asia-Pacific is expected to grow at the highest CAGR during the study period, owing to increase in penetration of market players, rise in disposable income, upsurge in geriatric population, and surge in road traffic accidents.