You are at:HomeManufacturing and ConstructionMachinery and PartsIndonesian Government’s Major Focus on Infrastructure Development of Housing Units, Water Supply and Irrigation Driving Demand for Plastic Pipes and Fittings during 2014-2019: Ken Research

The growth in the budget allocated for Infrastructure development from 2014-2019, increase in irrigation network to 162,000 hectares and target growth in dams in 2019 will drive the demand for plastic pipes for water distribution.

Shift from Metal Pipes to Plastic Pipes: Due to ease in manufacturing, lightweight, easy installation, anti-corrosive properties, temperature insulation, chemical resistance and low cost associated with plastic pipes, the review period saw a shift from steel pipe usage to plastic pipe usage. For instance, PVC pipes were directed towards housing and other infrastructure through its incorporation in the construction of windows, water pipes and insulation material for wiring cables, while HDPE pipes due to their higher quality and price were used in high rise residential estates. The plastic pipe industry saw a 16.3% CAGR growth from 2014-2019 in terms of sales volume.

Growth in Residential Units: Under this Programme, the Government of Indonesia is working towards building accommodations equal to one million units every year until 2019. The government constructed 499,702 houses in 2017 under this program, while as of January 2019; the target of 1 million homes in one year was successfully achieved. 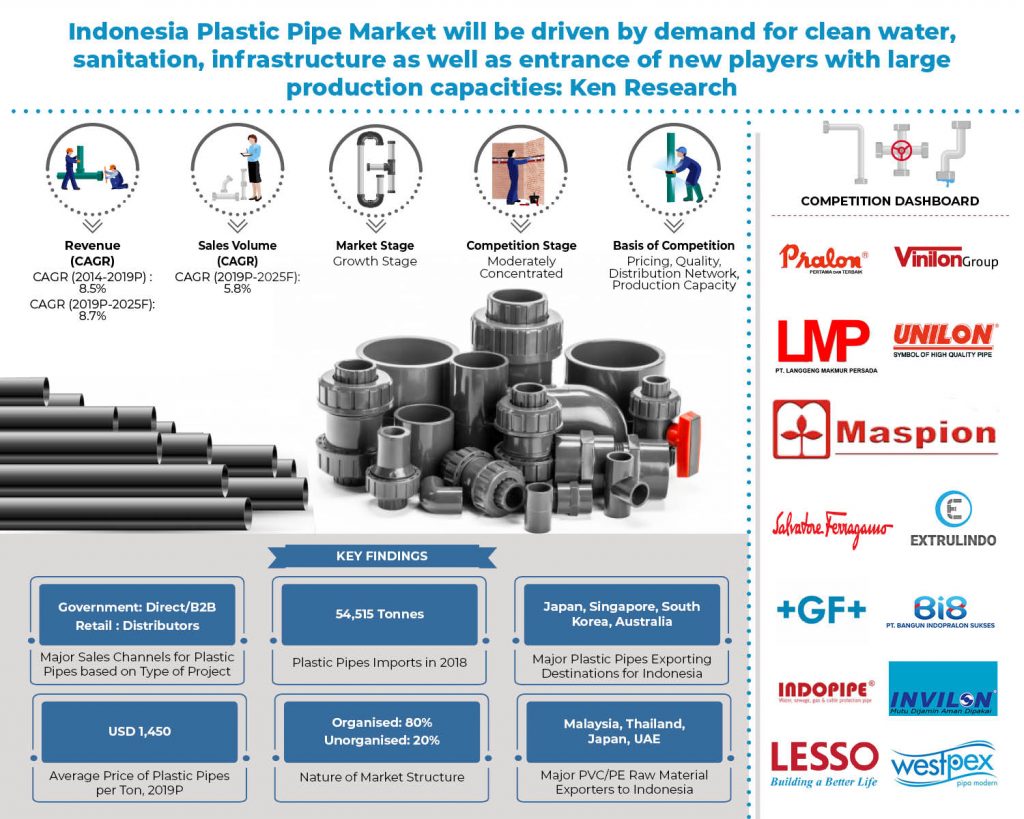 Improvement in Quality of Plastic Pipes: The quality control in Indonesia Plastic Pipes and Fittings Market has improved over the years. Historically, the manufacturers did not follow any international or domestic regulations because the consumers were price-sensitive and were not really concerned about the quality of the product. Hence to find a tradeoff between price and quality, different standards have been implemented in Indonesia namely, the Indonesian Standard SNI, International ISO Standard, and the Japanese Standard. SNI is the locally produced low-cost pipes while SNI and ISO are high-quality piping standards.

Presence of Raw Material Suppliers: Indonesia being an oil-rich country does not have any shortage of crude oil from which resin is manufactured For PVC piping, raw material suppliers are abundant in Indonesia which provided a low-cost input for PVC pipe manufacturing. The raw material for plastic pipes is manufactured in the country by companies such as Chandra Asri Petrochemical, PT Asahimas Chemical, and PT Luxchem Indonesia.

The report titled “Indonesia Plastic Pipes and Fittings Market Outlook to 2025 – By Type of Pipe (PVC, HDPE, and PP and PVDF) and By End User Application (Water Supply and Irrigation, Sewage, Mining, Cable Protection, and Others)” by Ken Research suggested that the shift from metal to plastic pipes due to favorable plastic characteristics, growth in investment in infrastructure for water distribution, mining, palm oil industry, housing, and residential units are few favorable indicators that led to the market to grow at a CAGR of 8.5% in terms of sales value for the period 2014-2019.

By Type of Pipes

By Type of PVC Pipe

By Nature of PVC Market

By Type of PE Pipe

Saudi Arabia Plastic Pipes and Fittings Market Outlook to 2022 – By Type of Pipes (UPVC, PVC  and CPVC, PE and Others) and Type of End-Use Applications (Irrigation, Water Supply and  Sewage, Plumbing, Chemical and Oil and Others)

New Zealand Plastic Pipe and Fitting Market Outlook to 2023 – By PVC, PE, Others Plastic Pipes; By End-User Application (Plumbing and Civil, Agriculture, Mining and Industrial, Telecom and Electrical and Others)

India Plastic Pipes and Fittings Market Forecast to 2026 – By PVC Pipes (UPVC and CPVC Pipes), by Applications (Irrigation, Sewerage, Water Supply and Plumbing, and Borewell Application), by Organized and Unorganized Sector and by Regions