You are at:HomeManufacturing and ConstructionIndustrial EngineeringAPAC 3D Printing Market is Driven by Growing Usage for Rapid and Functional Prototyping and Increasing Penetration of Manufacturing Industries in China and Japan: Ken Research

“Rising usage of 3D printing technology for prototyping as it reduces the time required in traditional manufacturing, allowing a prototype to be fabricated in hours at a fraction of the cost in comparison with the traditional process have driven the APAC 3D Printing Market”.

Increasing Investments in Asia-Pacific is Driving Growth: Government around the world launched several initiatives around the globe to promote additive manufacturing in order to boost the productivity and strengthen the manufacturing sector. In APAC, the government of China, South Korea and Singapore has invested millions of dollars for developing and commercializing the 3D printing technology. In late 2017, Japan’s New Energy and Industrial Technology Development Organization (NEDO) invested in a 3D printing technology which can fabricate from pure copper by using a high-intensity blue laser diode. In 2018, HP announced collaboration with Singapore’s Nanyang Technological University (NTU) and National Research Foundation (NRF) to launch a digital manufacturing lab with an investment of USD 84 million.

Partnerships and Collaborations: 3D printing companies are partnering and collaborating with different stakeholders in order to increase their presence and familiarity with the technology. For instance, in 2019, 3D Systems announced collaboration with Antleron in order to provide bioprinting solutions. Earlier, the company announced partnership with Toyota Motorsport GmbH. Stratasys collaborated with Team Penske. In March 2018, company entered in an agreement with Eckhart and earlier in February, company collaborated with PostNord.

Increasing Adoption Due to Shorter Lead Time and Product Development Cycle: 3D printing reduces the time-to-market of a new product as it enables rapid prototyping and ease of functional part production. The design creation and redesign challenges of a product can be easily overcome in 3D printing as it is designed on a software program so the file can be updated as per the requirement. This reduces the trial and error process and costs for re-tooling, redesign and rework which are present in the traditional manufacturing process and reduces the time taken for product development cycle.

The report titled “APAC 3D Printing Market Outlook to 2025- By Region (China, Japan, South Korea, India, Australia and Rest of the APAC), By Component (Printers, Materials, Software and Services), By Application (Prototyping, Tooling and Manufacturing), By End Users (Automobile, Healthcare and Medical Device, Aerospace, Machinery and OEMs, Consumer Goods and Others), By Technology and By Material“ by Ken Research suggested that the APAC 3D Printing Market has been increasing due to rising adoption by the end user industries, growth in the government initiatives and rise in adoption for the production purposes. The APAC 3D printing market is expected to register a positive CAGR of 16.1% in terms of revenue during the forecast period 2019P – 2025F. 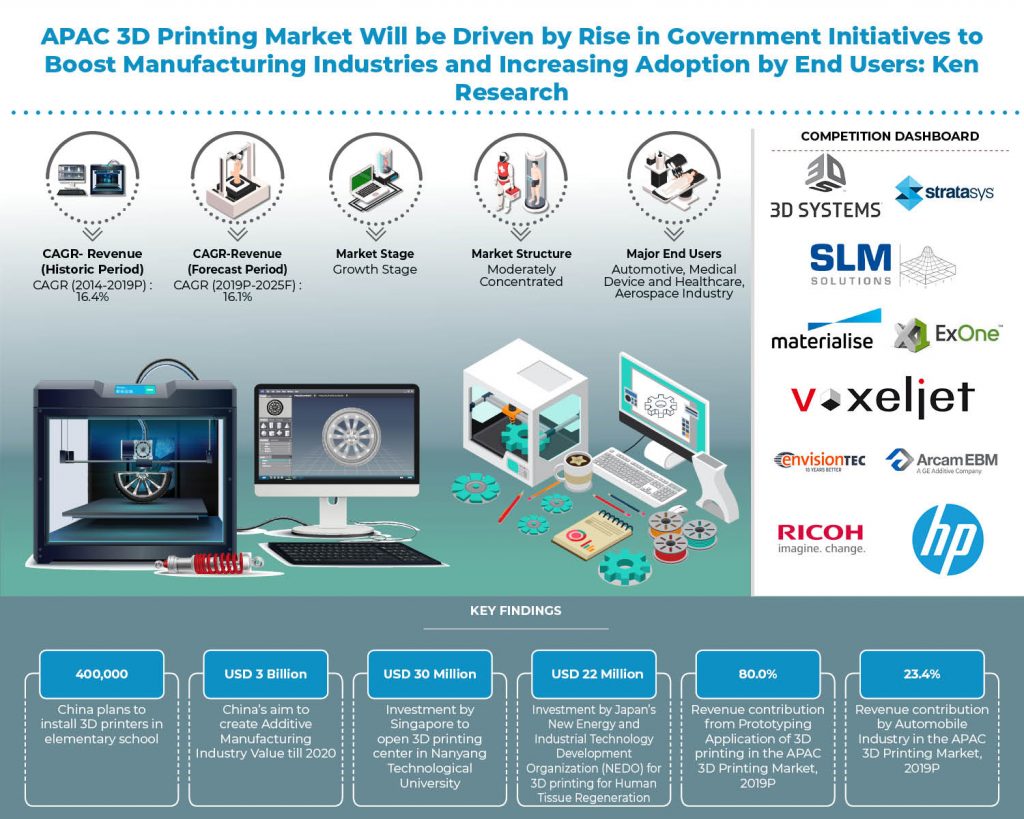 Rest of the APAC

By Type of Material:-