How Is The Drug Abuse Testing Devices Market Globally?

Until 1980’s, the research and investment in this field was minimal, which resulted in poor technological growth and as a result, urine and oral fluid were the most commonly used samples for drug testing.

Currently, the market is in its growing stage and with drugs such as marijuana becoming legal in many countries, their government has started investing more in drug abuse prevention. For example, the US government spent USD ~ million in the FY’2018 for screening, brief intervention and referral to treatment for drug usage. Globally marijuana, hashish, cocaine and bhang are the most widely used drugs, with an estimated ~ million users (~million to ~million) constituting ~ % of the global population ages 15–64 years.  New technologies such as use of eye movements to detect past and current habits of drugs and alcohol consumption are being introduced into the market. The camera will behave very similar to a lie detector by capturing 60 involuntary eye movements per second through a series of true or false questions. 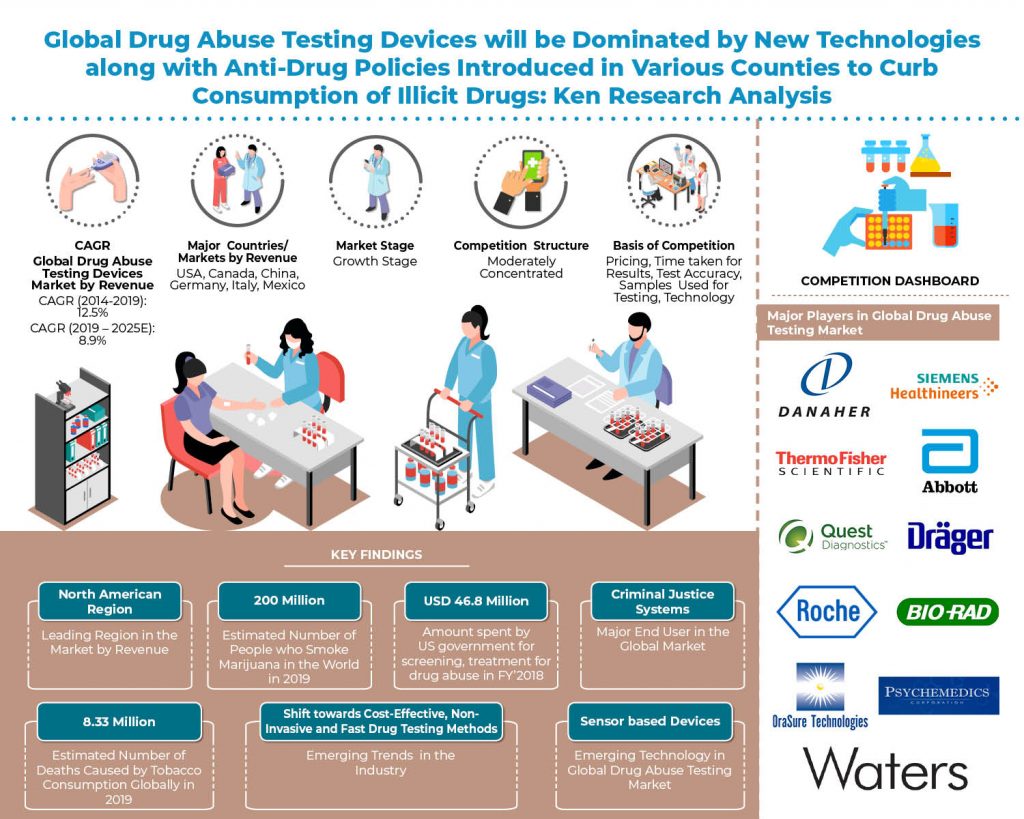 Since this market has a number of substitutes available, the companies in this field are focusing on developing technologies which would make drug testing convenient, increase test accuracy and reduce time taken to provide the results. A number of new samples such as hair and sweat have been introduced for the same purpose. Workplace testing has become popular across the world and companies are also introducing packages for the same. For example, “The Drug Testing Index of Quest Diagnostics” includes a large national representative sample size, longitudinal monitoring and a testing population that is generally a reflective of the US workforce.

The North American region accounted for the highest market share in terms of revenue by capturing ~% in 2019. USA being the major exporter of these devices.  It was followed by Europe, Asia-Pacific and the LAMEA region. The strict laws in the LAMEA region stating death penalties in case of drug consumption has reduced drug intake massively.

The criminal justice systems had the majority share in the market accounting for a total of ~%. In order to maintain decorum and safety of employees, a number of workplaces have started introducing random drug testing. The research laboratories had the least revenue share as they preferred to use biggest and complex devices for their research. The other end users include sports authorities and custom duties which have also started using these devices extensively.

The regional snapshots give an understanding about how the market has been forming in the region. The North American region dominates the global market followed by Europe, Asia-Pacific and the LAMEA region.

How Is The Competitive Landscape Of The Global Drug Abuse Testing Devices Market?

The global drug abuse testing devices market has a number of players producing devices using different technologies. The major companies in this market include Quest Diagnostics, Abbott Laboratories, Siemens Group (Healthineers) and Danaher Corporations. The other companies include Thermo Fisher Scientific, Dragerwerk AG, Hoffmann-La Roche AG, Bio-Rad Laboratories, OraSure Technologies, and Waters Corporation. The factors on the basis of which major players compete include accuracy of devices, price, technology used, samples used, time taken for results and ease of use of these devices.

By Production of Devices

Time Period Captures in the Report

Global Market Segmentations (By Region, By Products and By End Users)

For More Information, refer to below link:

Brazil Medical Device Market Outlook to 2025 – by Type of Device (Reagent for In-Vitro Diagnostics, Materials and Supplies, Laboratory Equipment and Others), Type of Business Activity (Import and Local Production), Channel of Sales (Distributor and Direct), Type of End User (Hospital, Clinics, and Diagnostic Lab Centers and Others) and By Region (South-East, South, North-East, Mid-West, and North)