Microgreens are small and delicate vegetables that are harvested when they form two cotyledons, a cotyledon is the first leaf of the plant to emerge from the seed after germination. It offers numerous health benefits as they are rich in antioxidants, vitamins, and minerals which helps in reducing the risk of several diseases such as heart disease, Alzheimer’s, diabetes, and cancer. Microgreens are widely used for improving the flavor of various cuisines such as salads, soups, flatbreads, pizzas, juices, and smoothies. It can be harvested using different farming techniques such as indoor farming, vertical farming, commercial greenhouses, and more, and are often used for residential and commercial purposes.

According to Ken Research Analysis, the Global Microgreens Market was valued at ~US$ 1 billion in 2017. It is estimated to be ~US$ 1.5 billion in 2022 and is expected to reach a market size of ~US$ 2.5 billion by 2028 growing with a CAGR of ~9% during 2022 to 2028. Some of the major factors that are likely to propel the growth of the market includes rise in health awareness, consumer spending, small-scale farming, and wide usage in restaurants and cosmetics industry. 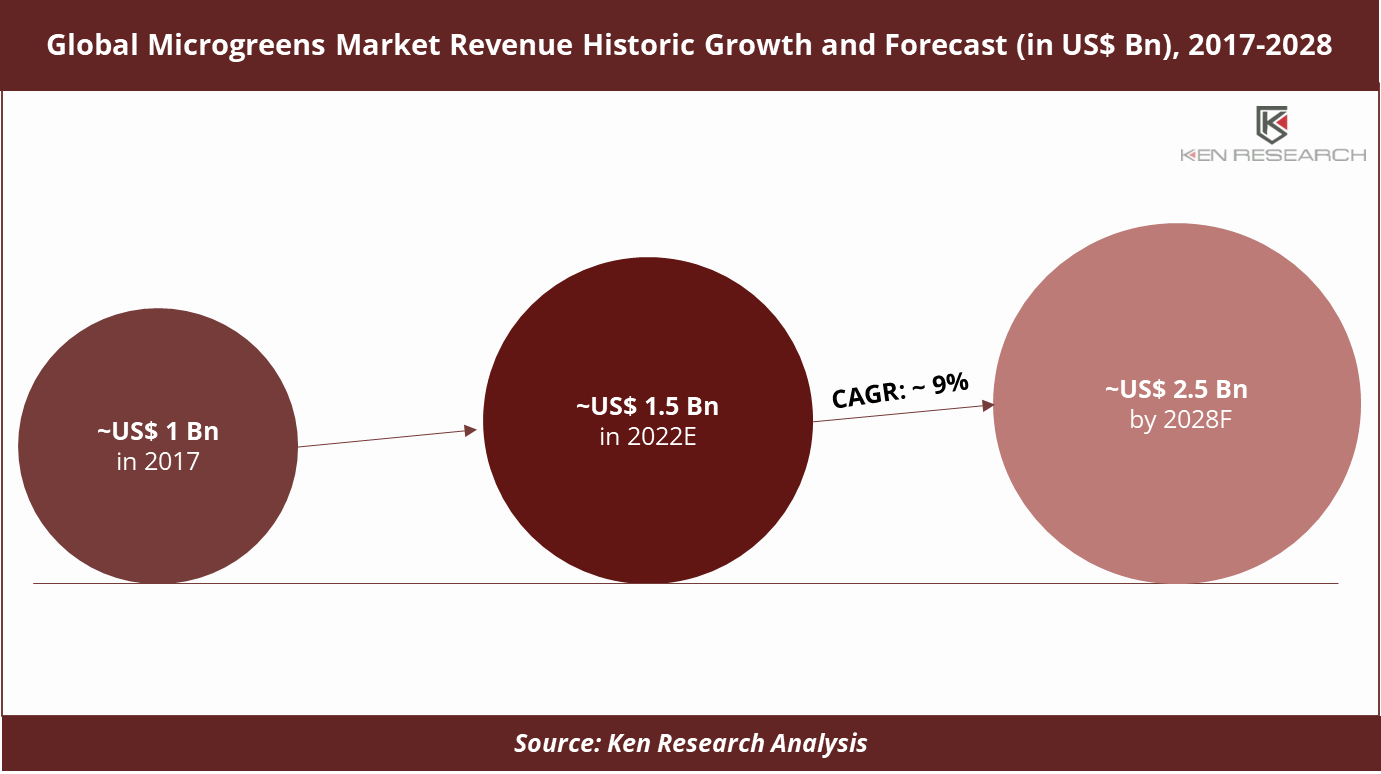 The increasing public awareness of health issues and the use of indoor farming techniques is likely to propel the growth of the global microgreens market.

High initial cost, lack of distribution channels, and availability of fertile soil for microgreens production are some of the major challenges hindering the growth of the global microgreens market.

Scope of the Report

By Type:  The broccoli segment by type held the largest market share in 2021 in the global microgreens market. 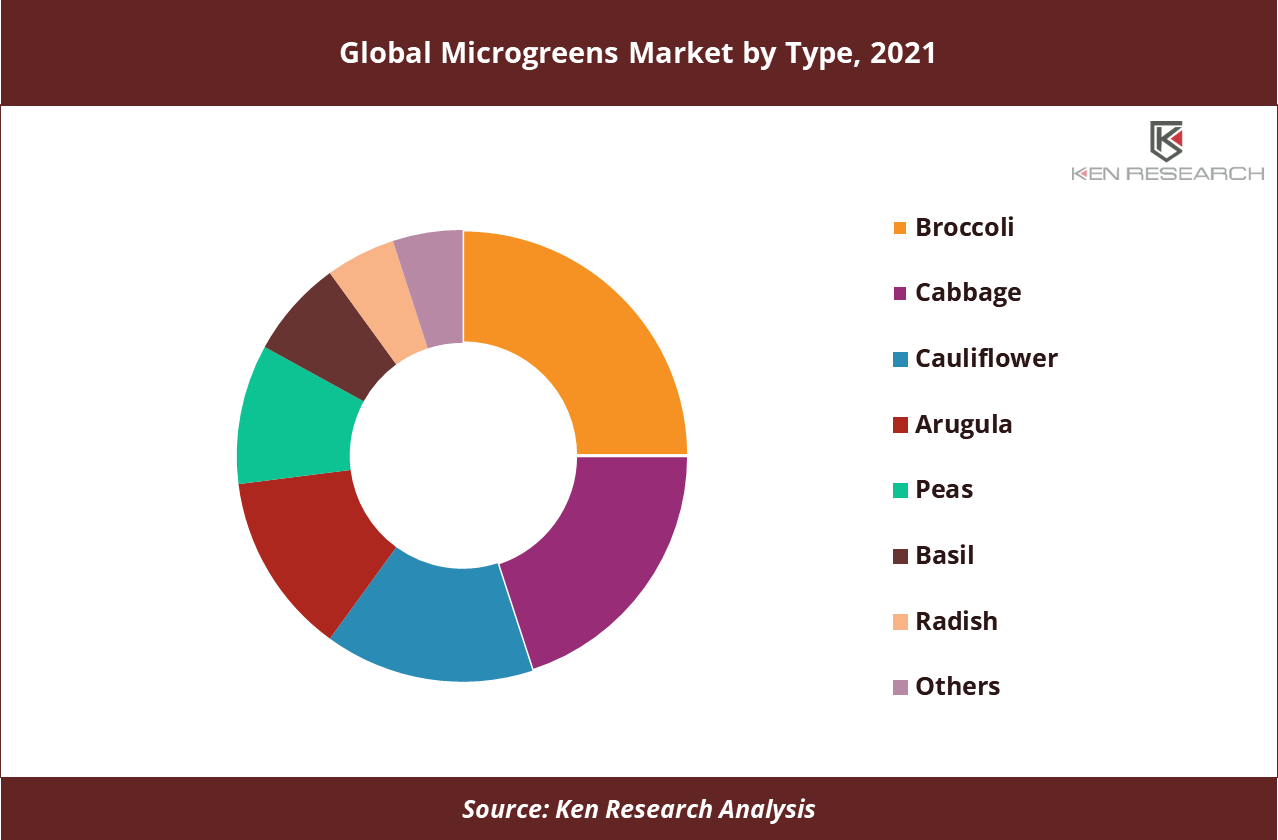 By Farming Method: The indoor vertical farming method held the largest market share in 2021 in the global microgreens market.

By Distribution Channel: The retail store segment accounted for the largest market share in the distribution channel segment in 2021 for the global microgreens market.

By End-User: The commercial segment dominated the global microgreens market in 2021, owing to the adoption of microgreens in various commercial industries. 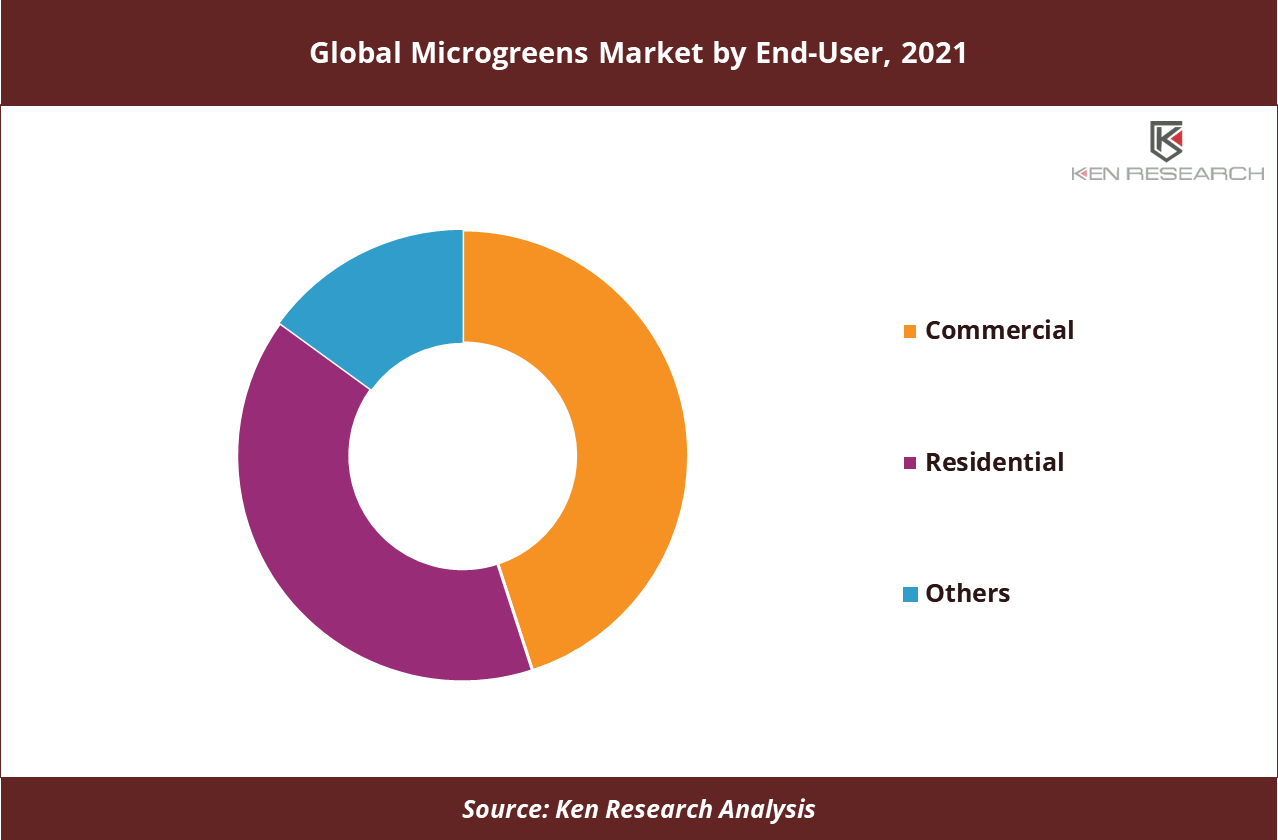 By Geography: North Americaaccounted for the largest market share among all regions within the total Global Microgreens Market in 2021. 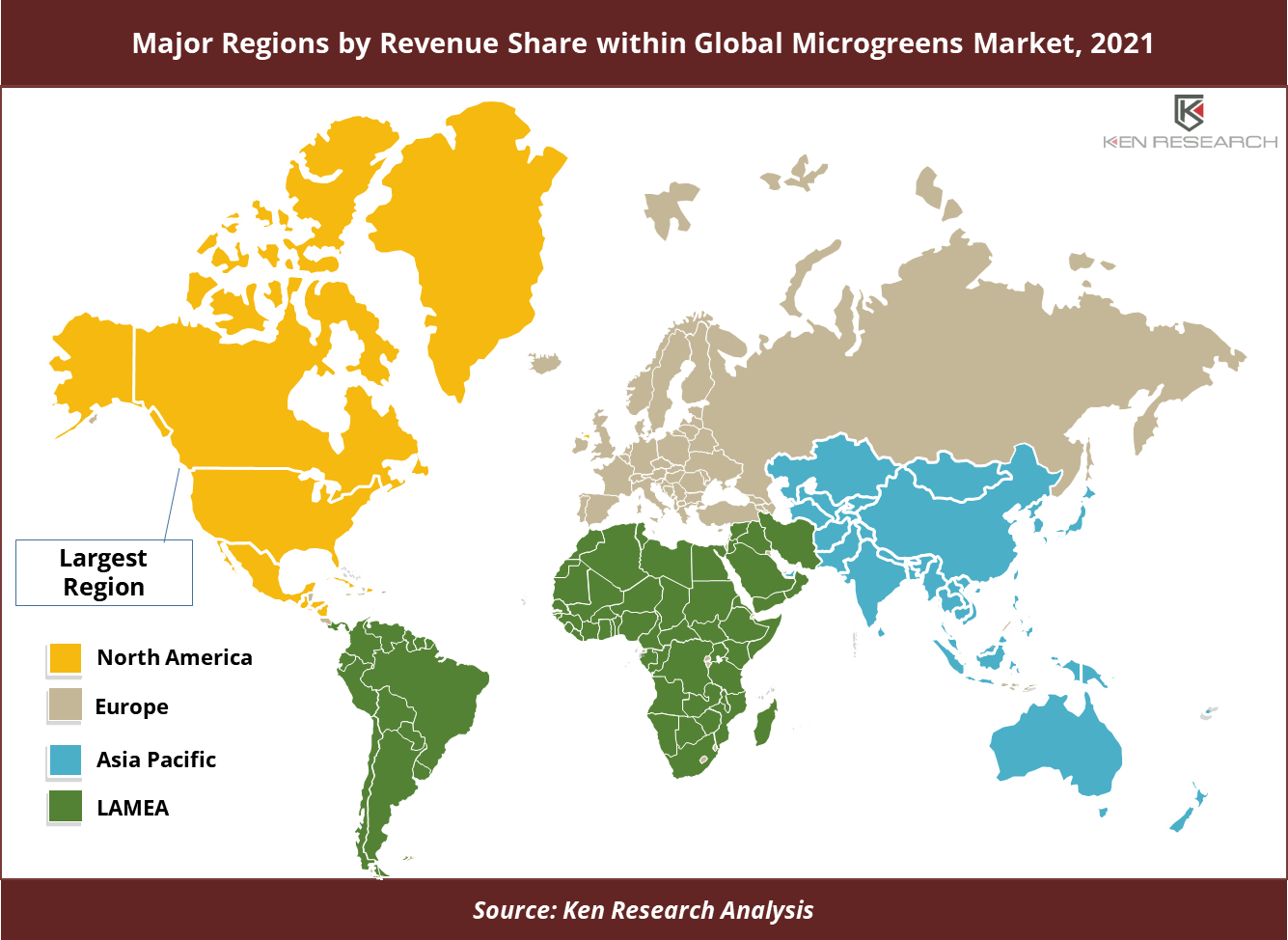 The global microgreens market is significantly competitive with ~200 players, which include globally diversified players, regional players as well as a large number of country-niche players each with their niche in Microgreens organic production. Large global players constitute ~10% of competitors, while country-niche players represent ~60% of competitors. Some of the major players in the market include AeroFarms, Good Leaf Farms, Fresh Origins, Gotham Greens, Madar Farms, 2BFresh, Farmbox Greens, Living Earth Farm, Metro Microgreens, Chef’s Garden, and among others. 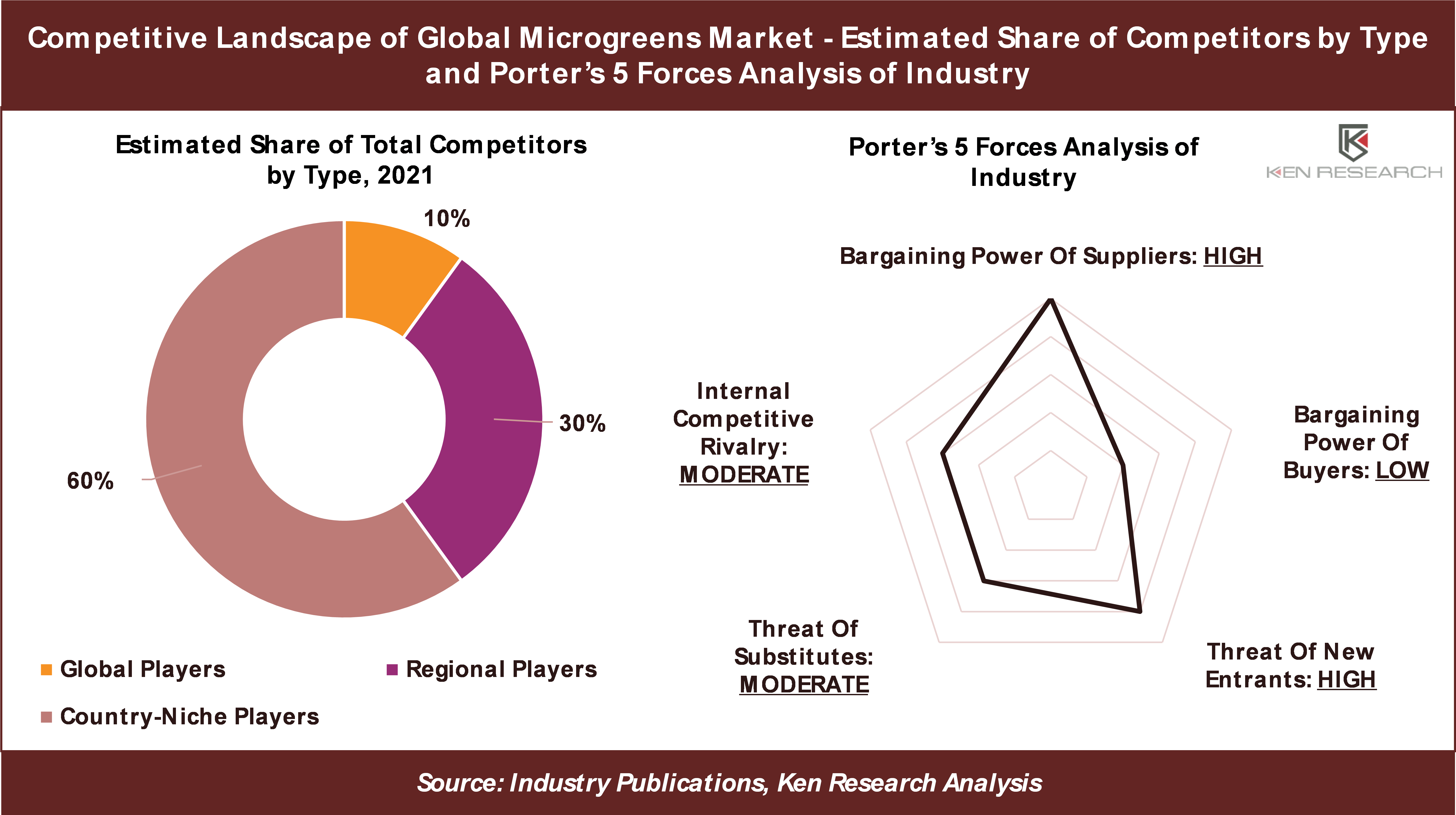 The Global Microgreens Market is forecasted to grow significantly with a CAGR of ~9% during the forecast period primarily driven by Increasing public awareness of health issues and the use of indoor farming techniques. Though the market is highly competitive with ~ 200 participants, few global players control the dominant share and country-niche players hold a significant share. North Americaaccounted for the largest market share among all regions within the total global microgreens market in 2021.

Note:This is an On-Demand/Planned report, so the figures quoted here for a market size estimate, forecast, growth, segment share, and competitive landscape are based on initial findings and might vary slightly in the actual report. Also, any required customizations can be covered to the best feasible extent for Pre-booking clients, and the report delivered within a maximum of two working weeks.

Key Players Mentioned in the Report