How the Global Rafting Equipment Market is Positioned in the Review Period?

During the review period 2012-2017, the market displayed a stable and steady growth at an annual growth rate of ~%. The growth was supported by factors such as growing awareness of a healthy lifestyle, rising popularity of rafting, growing interest of people in soft adventure sports and others.

During this period 2012-2017, an increased emphasis on water sports by various government bodies, especially tourism boards were visible especially in the leading markets like Americas and Europe. The tourism boards of countries like US, France, Germany and others have put high efforts to promote rafting and other similar water sports activities in an attempt to increase the revenue generated from the tourism industry.

Moreover, changing lifestyles, with more people taking up some form of recreational sporting activity, along with an increase in recreational expenditure, have helped in increasing the popularity of outdoor sports that includes rafting. People have taken up rafting professionally with rising popularity & awareness.

The major customer segment of the market comprise of individual customers. The market is affected by challenges including increased cost of inflatable rafting boats leading to preference for rentals, high degree of risk, unfavorable weather conditions and others.

Improved promotional campaigns were being run by governments and tour operators in various countries in both leading and growing markets, which are adding to the popularity and growth of rafting equipment market.

Increasing participation in the sport led to a rise in the number of water sports tournaments worldwide, further fueling growth in the market. For instance, the United States Rafting Association Championships divides the country into three regions: Western, Central and Eastern. Each region follows the rules of the International Rafting Federation (IRF) in competitions to determine a winner. The champions from the regions then race at the USRA National Championship Race, which then determines the US team for the World Rafting Championships. 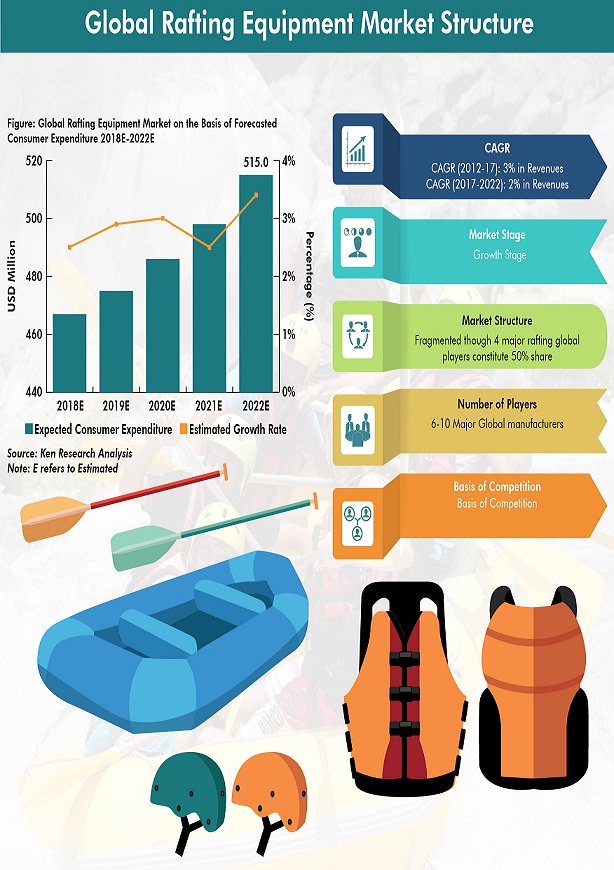 Which is the Best Selling rafting Equipment?

The global rafting equipment market was dominated by the revenue generated through the sale of protective gear as of 2017. It accounted for a share of ~% in the overall consumer expenditure in the market. The protective gear includes helmets, rescue throw bags and personal floatation devices or PFDs.

The major factor that supports this segment to stand out among the other rafting equipment is its bulk sales. These are bought by rafting participants and water sporting institutes.

The global rafting equipment market was dominated by the region Americas with a share of ~% in the year 2017. The region occupies the largest share in the market owing to the presence of well-established water sports infrastructure and the presence of rafting enthusiasts in the region. In the recent years, rafting has been regarded as a recreational activity in the region.

The region accounted for the third largest share of ~% in the market, which is regarded as a low share in comparison to the other two regions. Though the region has a presence of significant number of natural water bodies, it is experiencing a slow growth rate in the rafting equipment market.

Middle East and Africa has accounted for the lowest share of ~% in the rafting equipment market in 2017. Rafting is not a popular sport in the region; it has relatively low participation rates and very less facilities available.

Competition in the global rafting equipment market is highly fragmented due to the presence of large number of regional players. In the Americas, the competition in the concentrated however, majority of market leaders have substantial control in terms of good market and brand share in 2017. Majority of manufacturing facilities are based in this region leading to large exports to countries such as UAE, South Africa and India. Similarly is the scenario in Europe.

The major players in the market carry out both manufacturing as well as trading. Competition in APAC and Middle East & Africa is still in the growing phase & highly fragmented. There are about 4 major rafting equipment manufacturers operating in the global market.

Majority of manufacturing clusters of these major manufactures are located in North America and Europe. The players in the market compete on the basis of prices, product performance (durability & sturdiness), geographic presence, variety in product portfolio in terms of different sizes, material, width, capacity, texture and colors available and association with famous sportsmen/sports teams/event sponsoring for brand endorsements. The major strategy followed by the players in the market is the expansion of product lines which is perceived to enable the leading players in the market to maintain their dominance in the market.

Supported by the growing popularity of the sport and rising awareness among the people regarding the health benefits associated with rafting the global rafting equipment market is expected grow at a CAGR of ~% during the forecast period 2018-2022E. The presence of ample amount of water bodies across the world largely supports the growth in the rafting equipment market.

High cost of the inflatable boats is expected to raise the preference for rentals over owning during the forecast period. The rental stores are expected to gain popularity among the people as they offer additional services like professional advice in choosing the rafts for the customers.

Companies Cited in the Report

Key Factors Considered in the Report

Comprehensive analysis of Global Rafting Equipment Market and its segments

Listed major players and their positioning in the market