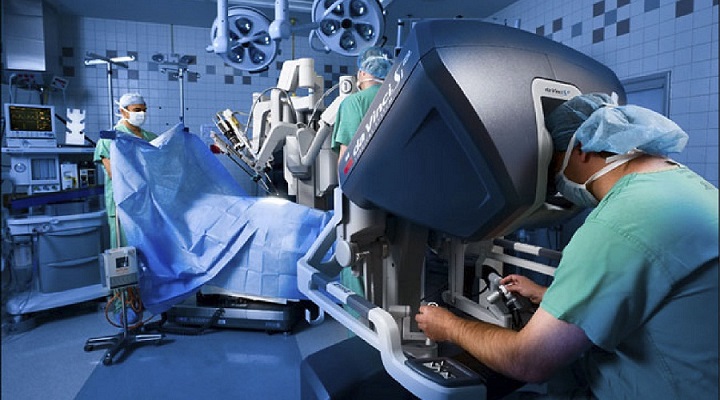 The Global Robotic Surgery Services Market is expected to decline from USD 0.71 billion in 2019 to USD 0.57 billion in 2020 at a compound annual growth rate (CAGR) of -19.04%. The decline is mainly due to the Covid-19 outbreak resulting in other patients delaying their episodes of care. The market is then expected to recover and reach USD 1.03 billion in 2023 at CAGR of 21.55%.

The robotic surgery services market consists of the sale of services provided Robotic surgical technology, the highly advanced technological form of non-invasive surgery that utilizes robots and computer systems to conduct surgeries with lesser incision and more precision. The commonly used robotic surgical system consists of a mechanical arm and camera arm attached to surgical instruments with a controlled by a surgeon being seated at a computer console which is usually in the same room as the surgical table, or can be around the world.

North America was the largest region in the robotic surgery services market in 2019. Asia-Pacific is expected to be the fastest growing regions in the forecast period.

On October 2019 Corindus Vascular Robotics Inc., a leading developer of precision vascular robotics was acquired by Siemens Healthineers AG, a German conglomerate of medical technology offering wide range of products in the fields of diagnostic and therapeutic imaging, laboratory and point of care diagnostics, and molecular medicine for an amount of USD 1.1 billion the main aim of this acquisition is to optimize the procedures and to increase the clinical outcomes by collaborating each other’s technologies, it also opens a new market for Siemens.

Safety concerns regarding the use of robotic surgery services are likely to cause a hindrance to the robotic surgery services market. The FDA Safety communication raised a concern in February 2019 about using robotic surgery for mastectomy procedures or for the prevention or treatment of cancer as the effectiveness and safety of these devices is not established. According to the survey of New England journal of medicine published in November 2018, the survival rate of patients having minimally invasive surgery compared to patients having open surgery is lower. Over the past two decades more than 8,061 device malfunctions, 1,391 injuries, and 144 deaths occurred in robotic surgery service. Due to such concerns more products have been recalled from the market. On September 2019 Zimmer Biomet has recalled its ROSA brain 3.0 robotic surgery system because of a software problem which can drive the robotic arm to an incorrect position which can risk patient’s life. This was identified as a class 1 recall which is the most serious kind of classification by the FDA. These safety concerns lead to more stringent regulations by the regulatory agencies like the FDA, which would in turn increase the cost and time period for the research and development activities. Therefore the safety issues pertaining to robotic surgeries leading to product recalls is expected to hinder the growth of the robotic surgery services market.

Image guide navigation system combined with the robotic surgery system offers more possibility to visualize and perform the minimally invasive surgery in areas which were earlier difficult, especially the orthopedic surgeries and neurosurgeries. The Mazor X Stealth system by Medtronic, and the NuVasive’s Pulse and Excelsius GPS by Globus Medical, among others use image guided navigation system to perform spine surgeries, and orthopedic implant surgeries such as total, partial knee and hip replacements as they provide the surgeon with 3D experience. The image-guided navigation reduces the radiation effects and patients do not require to take an X ray after the procedure. These factors state that the image guided navigation system is expected to be a trend in robotic surgery services.

Increase in purchasing power of hospitals and ambulatory care services has helped in the growth of the robotic surgery service market. Hospitals and ambulatory care services are interested in buying latest technologies to provide advanced care to the patients as well as to achieve an edge over their competitors. According to the fourth quarter financial results 2019 of intuitive Surgicals, the robotic surgical giant, the company has shipped around 336 DA Vinci systems during the quarter when compared to 290 during the fourth quarter of 2018. It has almost 5,582 DA Vinci systems installed, with a 12% year-over-year increase. More than 1 million procedures were performed around the world with the DA Vinci In 2018 from 136,000 in 2008. The need for more minimally invasive surgery by growing geriatric population coupled with the prevalence of chronic disease such as diabetes, HIV/AIDS, asthma, arthritis, and other diseases has increased the demand for robotic surgery services. According to the World Health Organization (who) report, there will be a 57 % increase in chronic illness. Therefore, the purchasing power of hospital and ambulatory care services coupled with the increase in the geriatric population and prevalence of chronic illness have contributed to the growth of robotic surgery services market.