You are at:HomeMetal Mining and ChemicalsChemicalsIndia PVC Emulsion Market Outlook to 2025: Ken Research

The report titled “India PVC Emulsion Market Outlook to 2025-Rising Consumption in Artificial Leather and Usage in Toy Manufacturing to Elevate Demand” provides a comprehensive analysis of the current positioning of the PVC emulsion/paste industry in India. The report covers various aspects including the market size, ecosystem & value chain analysis, end-user analysis, import-export scenario, trends and roadblocks faced by the industry. The report concludes with market projections for future of the PVC Emulsion industry in India including forecasted industry size by revenue and domestic demand by FY’2025 and segmentations and the analysts’ take on the future.

The Indian PVC Emulsion market is a major contributor to the growth of various key end-user sectors in the country. While suspension PVC dominates the Indian PVC resin industry, PVC emulsion/paste has witnessed significant growth in demand in the recent years. Both emulsion and micro-suspension processes of manufacturing PVC paste are prevalent in India. The PVC Emulsion/Paste industry in India in terms of demand in metric tons has grown at a CAGR of 7.8% over the period FY’2014-FY’2020(P). A large number of end-user industries such as artificial leather, flooring, coir mats, adhesives and sealants, conveyor belts among others have driven the demand for PVC paste in India. The domestic demand is catered by both imports as well as domestic production. The government is recently making efforts to stimulate domestic production in the country which is expected to positively impact the industry. 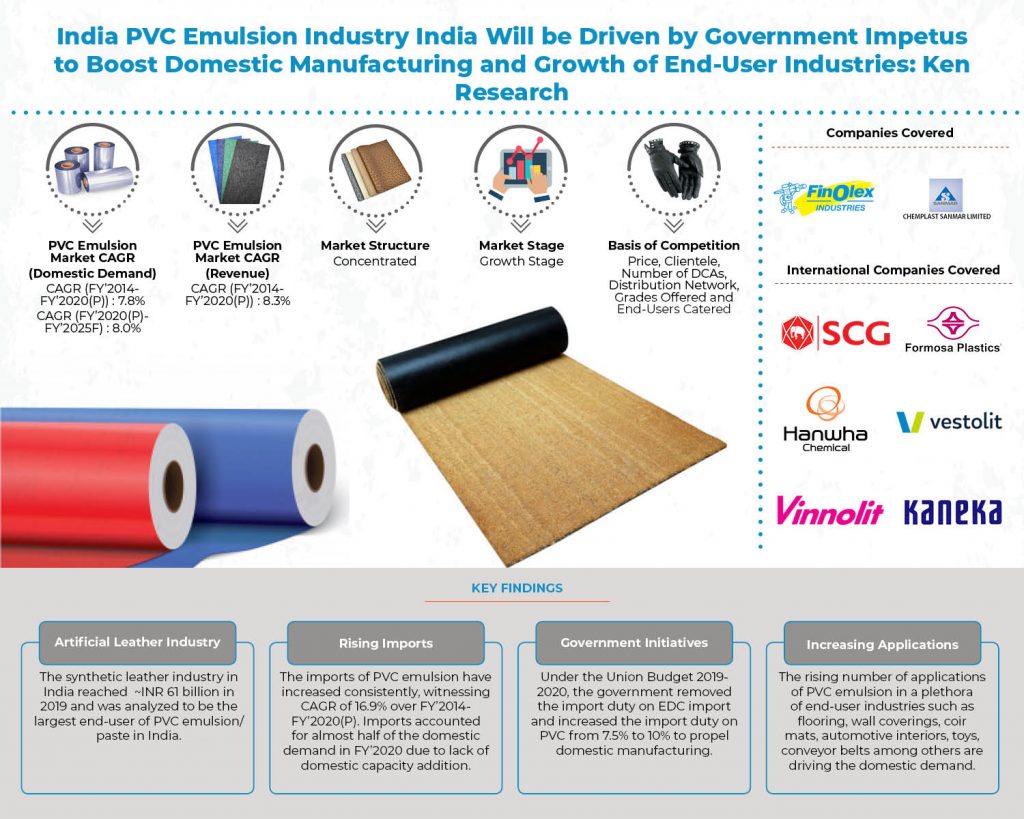 Production: The domestic demand for PVC emulsion is met by both imports and domestic production. The domestic production capacity is stagnant since the last few years which have led to the rise in imports into the country. In FY’2019, the top five countries South Korea, Columbia, Taiwan, Japan and China accounted for ~68.0% of the total import on the basis of value of imports.

End-Users (Domestic Volume): The synthetic leather industry was analyzed to be the largest end-user of PVC emulsion in India in FY’2020(P). The synthetic leather industry was valued at ~INR 61 billion in 2019. Flooring, films & sheets, coir mats, adhesives & sealants and other industries have also contributed to the rising demand in the country as PVC paste it helps in imparting different properties in terms of color, texture and opacity to end-product. PVC emulsion is majorly used for top and base coating in majority of these applications such as synthetic leather, flooring, conveyor belts and more.

End-Users (Import Volume): Synthetic leather accounted for majority of the imported PVC paste/emulsion consumption due to the large volumes required. There is growing demand for synthetic leather, particularly in the automotive industry for upholstery. Many large companies operating in the sector also export huge volumes of synthetic leather. In the recent years, the demand for PVC emulsion/paste by industries such as printing ink, toys, coir mats, conveyor belts & more has also increased significantly. Many coir mats & conveyor belt companies engaged in exports, directly import PVC emulsion/paste from countries such as Korea, Taiwan, China, Thailand & Germany among others.

The competition in the market is concentrated with only two players namely, Finolex Industries and Chemplast Sanmar, having domestic manufacturing capabilities. Both of these companies together cater almost half of the total domestic demand. These companies compete on the basis of parameters such as prices, grades offered, clientele, distribution network and end-users catered.

The industry is expected to witness significant growth in terms of demand by FY’2025 with increasing number of applications of PVC paste and growth of end-user industries such as synthetic leather and automotive industry. The impetus of the government to proliferate domestic production by removing import duty on EDC import, increasing import duty on PVC from 7.5% to 10% and finished PVC products such as vinyl flooring from 10% to 15% is expected to positively impact the market in the future. Increasing demand for PVC emulsion for manufacturing coir mats, adhesives & sealants and conveyer belts among other products is further expected to stimulate industry growth.

Trends & Developments, Issues & Challenges and Governments Regulations in the Industry

Indonesia Plastic Pipes and Fittings Market Outlook to 2025 – By Type of Pipe (PVC, HDPE, and PP and PVDF) and By End User Application (Water Supply and Irrigation, Sewage, Mining, Cable Protection and Others)