What is the Potential of Indonesia Healthcare Market?

The Indonesia Healthcare Market has shown a positive incline during 2012-2017 but with respect to the expanding population of Indonesia, the market is still underserved especially in the underdeveloped and rural areas as of 2017. People across Indonesia are facing several health care issues due to sedentary lifestyle and fast food consumption habits, such as obesity, diabetes, and other cardiovascular diseases, which are demanding for technologically advanced healthcare infrastructure. The healthcare market has increased on the account of increasing healthcare facilities, innovation in pharmaceutical manufacturers and clinical laboratory services and expansion of pharmacy retail chains across the country. The market has witnessed enhancing innovation in nutritional health segment, biopharmaceuticals and specialty pharmaceutical products. 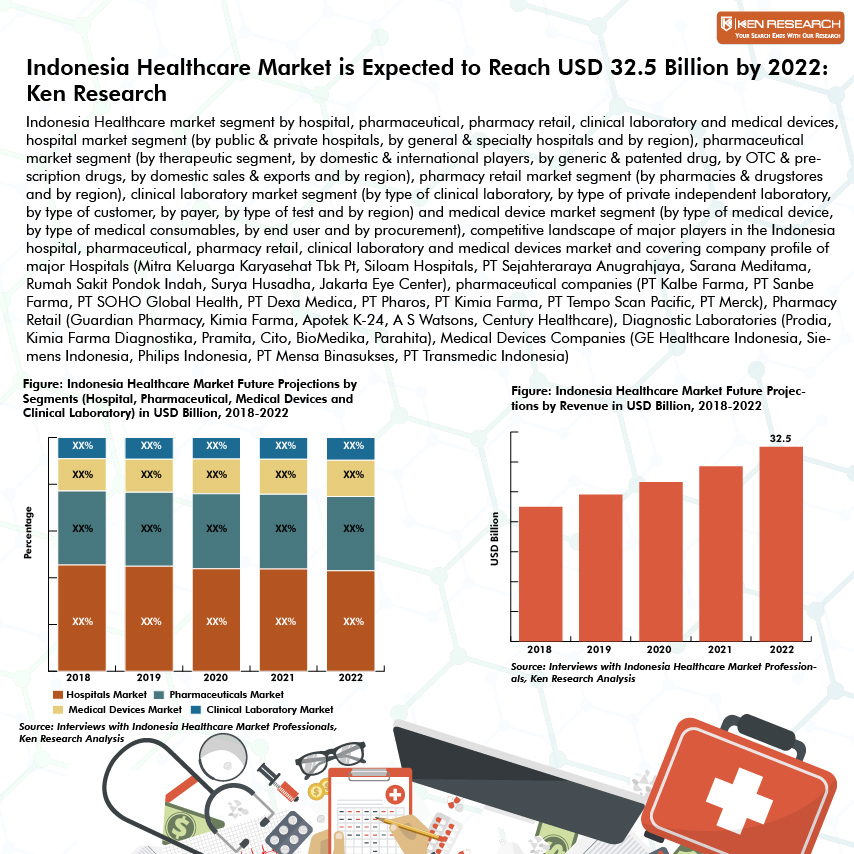 Hospitals in the country contributed to the maximum share of overall healthcare market as of 2016. Over ~% of the market revenues were generated from the hospitals segment followed by the pharmaceutical market with ~% in 2017.

The Indonesia Healthcare market revenue has increased from USD ~ billion in 2012 to USD ~ billion in 2017 primarily due to rising prevalence of non-communicable and lifestyle diseases including diabetes, asthma and heart disorders. The industry has undergone various deregulation programs which has encouraged foreign investment in the industry. Furthermore, increase in demand for generic medicines has led the major players in the industry to expand their production capabilities.

How Has the JKN Scheme Impacted the Indonesia Pharmaceutical Market?

The market size of Indonesia pharmaceutical industry has increased from USD ~ million in 2012 to USD ~ million in 2017 at a CAGR of ~%. The market is in the growing stage supported by favorable government regulations and entry of foreign players in the space. During 2017, the domestic players dominate the market with major focus on production of generic drugs. This is driven by the implementation of universal healthcare system. The program has led to an increased demand for generic medicines from public and private hospitals participating in the program. Further, the industry witnessed various deregulation programs which encouraged foreign investment in the industry. For instance, the government removed the pharmaceutical industry from its negative investment list implying 100% foreign ownership is allowed. Major therapeutic segments was anti-infective due to the prevalence of communicable diseases such as TB, influenza and others followed by Gastrointestinal, cardiovascular, Central nervous system, respiratory, musculoskeletal and dermatology.

How Have the Various Segments Performed in Indonesia Pharmaceutical Market?

How is the Competitive Ladscape of Indonesia Pharmaceutical Market?

There are ~ pharmaceutical companies (~ domestic and ~ international companies) located in Indonesia and ~% of them are located in Java in 2016. These players compete on the basis of distribution network, product portfolio, marketing activities and research and development. The domestic players dominate the generic drug and OTC drug segment.

How is the Indonesia Pharmacy Retail Market Growing?

How Have the Various Segments Performed in Indonesia Pharmacy Retail Market?

Pharmacies have accounted for ~% of the share of Indonesia pharmacy retail revenue in 2017 whereas drugstores have accounted for ~% of the revenue share. The number of pharmacies increased from ~ in 2012 to ~ in 2017 with average revenue of a pharmacy estimated at IDR ~billion in 2017. The number of drugstores increased from ~ in 2012 to ~ in 2017. West Java has gathered ~% of the total pharmacies and drugstores in Indonesia in 2015. This can be attributed to more number of hospitals located in the region. East Java has captured ~% of the pharmacies and drugstores driven by increase in foreign investment in the pharmacy sector.

What are the Major Companies Operating in This Space?

The pharmacy retail market in Indonesia is highly fragmented with major organized chains (Guardian pharmacy, Kimia Farma, Apotek K-24 and AS Watsons Group) accounting for ~% of the revenue share in 2016. These players compete on parameters such as proximity, value added services, availability of drugs, promotional offers and tie ups with major healthcare institutions. In order to increase their revenue, the players offer their products through online portals.

Indonesia Clinical Laboratory Market is in the growing stage. The market has grown at a CAGR of ~% during 2012 to 2017 with revenue estimated at USD ~ billion in 2017. The industry has witnessed expansion of private laboratory chains and use of advanced technology in order to provide high quality laboratory services. With the implementation of JKN, the demand for laboratory services has further increased. The public hospitals mostly perform routine test while the esoteric tests are outsourced to the private clinical laboratories.  Due to growing awareness amongst people about healthy living, private and public laboratories have witnessed an increase in walk in patients asking for routine checkups which is funded out of the patient’s pocket. Further, the major private laboratory chains have expanded their operations in terms of capacity and geographic presence. The six major private laboratories occupying ~% of the revenue share of Indonesia Private independent labs in 2016 are Prodia, Kimia Farma, Pramita, Cito, Parahita and BioMedika.

What are the Major Market Segments in Indonesia Clinical Laboratory Market?

What Are the Major Competition Parameters?

The market was in the growing stage during 2012-2017 and is almost entirely import driven. The market has seen increasing number of foreign players supported by growing number of hospitals or other health centers in Indonesia. There were ~ medical device distributors and ~ medical device production units in Indonesia as of 2015. Indonesian export performance for medical equipment commodity also exhibited a positive trend. The main export destination for Indonesian medical equipment are Singapore, Germany, Japan, the United States, China, the Netherlands, India, Malaysia, Myanmar and Afghanistan. The demand has increased majorly for diagnostic imaging, medical consumables, aesthetic, orthopedic and dental products. This is driven by increased healthcare spending and rising awareness about different treatment methods. Rising share of esoteric tests has created demand for modern equipment such as pacemakers with micro-chip technology, laser surgical device and test kits, which may include monoclonal antibody technology.

How have the Different Segments in Indonesia Medical Device Market Performed?

Diagnostic imaging products have accounted for the largest share of ~% of the revenue share in Indonesia Medical Devices market in 2017. This is followed by medical consumable product with ~%, aesthetic devices with ~%, auxiliary devices with ~%, dental products with ~% and orthopedic implants with ~%. Hospitals both public and private are the major end users of medical devices and have accounted for ~% of the revenue in Indonesia Medical devices market in 2017. The medical clinics and Laboratories and other healthcare institutions together have contributed ~% of the revenue.

What are the Major Companies Operating in the Space?

How has Indonesia Hospital Market Grown?

The hospital market grew at a five year CAGR of ~% during 2012-2017 from USD ~ billion in 2012 to USD ~ billion in 2017. Major driving factor for increase in hospital market was the prevalence of the severe chronic diseases in Indonesia. Several diseases like Pneumonia, Multi-bacillary (MB) Leprosy and Diarrhea had increased in the year 2015. The number of specialty hospitals increased from ~ in 2012 to ~ in 2017. The industry is still in the nascent stage with huge scope for development. The market has witnessed rise in use of digital healthcare services. For instance, Practo entered the Indonesian market in 2015 providing consumers the option of searching for doctors through a database of over 4,200 doctors, and covering 60% of the clinics in Jakarta DKI. Further, the market revenue growth was facilitated by increase in the allocation of the Government budget from IDR ~ Trillion in 2012 to IDR ~ Trillion in 2017. The foreign investments rose from USD ~ million in the year 2015 to USD ~ million in the year 2016.

How have the Major Segments in Indonesia Hospital Market Performed?