You are at:HomeDefense and SecurityMiddle East Cyber Security Market Outlook to 2022: Ken Research 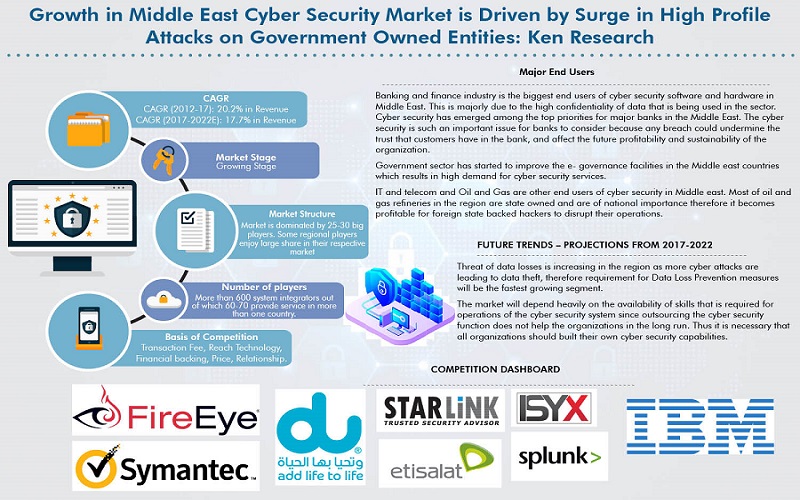 This report will help the readers to identify the ongoing trends in the industry and anticipated growth in future depending upon changing industry dynamics in coming years. The report is useful for system integrators, developers, distributors, resellers, end users such as government and potential entrants and other stakeholders to align their market centric strategies according to ongoing and expected trends in the future.

Market Size: Cyber security industry in Middle East registered a positive five year CAGR during 2012-2017. The market size grew constantly from 2012 to 2017. The growth was mainly driven by threat arising from increasing number of cyber attacks on critical infrastructure which were of national importance. Technological innovations and increasing focus on infrastructure development has also resulted in increase in demand for cyber security. The cyber crimes are one of the biggest concerns for the companies today. The number shows that the companies have to face a lot of loss which are in both tangible as well as intangible form.

Central Middle East region is the biggest market for cyber security products which accounted for majority of the market share in 2017, swiftly followed by Western and Southern part. Large number of cyber attacks over the years and rapid digitalization are the major reason behind the growth in the region.

By Type of Solution

The market is dominated by firewall and intrusion detection systems which together acquire majority of the total share in the cyber security market.

The developers of cyber security products in Middle East sell their offerings to end users through distributors and system integrators. The report focuses on discussing the competitiveness of both major developers as well as system integrators present in the market. The market is dominated by major global players although entrance of some other players has resulted in change of market dynamics. The report clarifies the parameters to differentiate one competitors from others and measures through which each company can be evaluated from the perspective of end users.

The market for cyber security in the region is estimated to grow by double digit CAGR. This market will be primarily driven by sale of firewall and intrusion detection devices which will acquire most of the market share respectively. The market will primarily grow due to requirements of network security which most of the enterprises fell as the basic necessity in today’s ever evolving cyber threat landscape. Central and Western region will drive majority of demand in the near future mainly due to diversification of economy in countries as well as digitalization of existing infrastructure. Cloud security is one technology which will have a wide impact on the market.

By Type of Regions

By Type of Solution

By Type of Security