You are at:HomeAgriculture and Animal CareInsecticides, Fertilizers, Crop Protection Chemicals & Plant Growth Regulators were some of the widely used Agrochemicals over the past few years: Ken Research

“New food processing, manufacturing, and packaging techniques have resulted in a flourishing F&B sector leading to increase in demand for agricultural products such as food grains, oilseeds, vegetables, and fruits, which, in turn, is driving the agrochemicals market growth.

US agrochemical market revenue was driven by growing demand for crop protection chemicals due to frequent outbreaks of pest attacks on crops, which resulted in heavy losses during that season. Apart from that, the growing animal husbandry sector has increased the demand for animal feed, further triggering the demand for agrochemicals such as fertilizers and plant growth regulators. Low availability of arable land has also triggered the demand for fertilizers alongside growing demand for macronutrients, such as nitrogen, phosphorus, and potassium, which has collectively boosted fertilizers market in the country. Additionally, the US was among one of the countries with the highest agricultural output in 2016 with corn being its major product.

Agrochemical manufacturers increased their emphasis towards biotech plants / crops to increase the demand for their particular product. Mechanization of agricultural activities, lower fund borrowing rates and growing food processing industry have also driven the country’s agriculture sector. Major pesticide producers have either launched variety of genetically modified seeds, or are in the process of developing a new variety of pesticides which are all intended to be grown with the company’s own proprietary formulation. Biotechnology firms have established their presence in the market based on new & unique biological pesticides, particularly by forging alliances with established companies / firms.

Advances in crop varieties and seed technology, including transgenic varieties, have also played a major role in higher yields. For instance, diffusion of biotechnology and advancements in production techniques has positively contributed further efficiencies.

The report titled “US Agrochemical Market Outlook to 2025 – Increasing Usage of Integrated Pest Management Activities and Bio Pesticides to Drive Market Growth” by Ken Research suggested that US Agrochemical Market is further expected to grow in future majorly due to entries of several foreign players have also contributed towards the same coupled with increasing usage of Bio pesticides in the US. The country’s agro-chemical market is expected to register a positive six year CAGR of 2.3%, 1.6% and 0.4% in terms of revenue by formulants, revenue by technicals and pesticide active ingredient demand respectively during the forecast period 2019P-2025F. 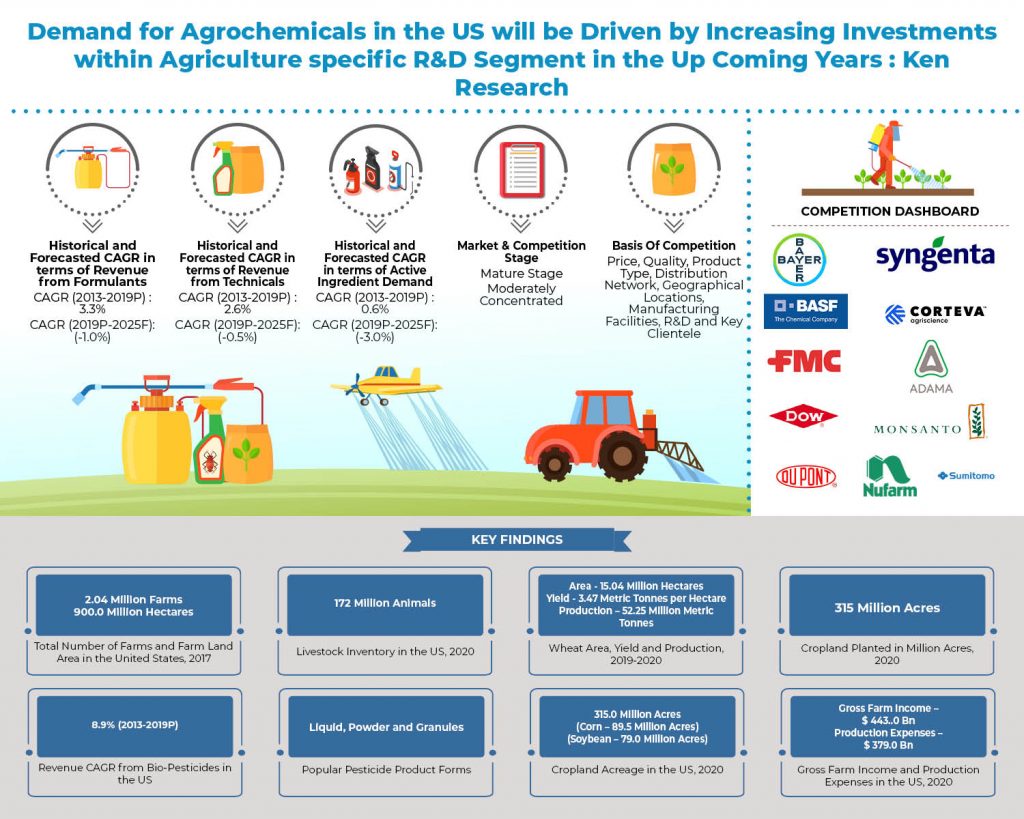 Brazil Agrochemical Market Outlook to 2025 – By Type of Pesticides (Herbicides, Insecticides, Fungicides and others), By Generic and Patented, By Form of Pesticides (Liquid, Granules and Powder), By Market Structure (Organized and Unorganized Sector), By Type of Crops (Cereal Crops, Fruit Crops and Vegetable Crops), By Region (Mato Grosso, Parana, Sao Paulo, Rio Grande do Sul and Others)

Indonesia Agrochemicals Market Outlook to 2025- By Type of Pesticides (Herbicides, Insecticides, Fungicides, Bio Pesticides and Others), By Type of Crop Protection Product (Generic and Patented), By Application (Cereals, Vegetables, Fruits and Plantations) and By Sales Regions (Java & Bali Region, Sulawesi, Sumatra and Kalimantan)

Europe Agrochemical Market Outlook to 2025- By Herbicides (Based on Phenoxy-Phytohormones, Triazines, Carbamates), By Fungicides ( Based on Inorganic, Benzimidazoles, Triazoles), By Insecticides (Based on Pyrethroids, Organophosphates, Carbamates), By Biopesticides (Bioherbicide, Bioinsecticide, Biofungicide), By Country (France, Spain, Italy, Germany, Poland), and By Application (Cereals, Fruits, Vegetables)