Vietnam is one of the fastest growing pharmaceutical markets in South East Asia. The pharmacy retail market, although having presence of pharmacy chains since many years, gained momentum particularly in the last decade with entry of new players and growing healthcare expenditure and health & wellness awareness. Various social and economic factors have contributed to the growth of the industry. Vietnam has been experiencing a fast growing proportion of aging population. The proportion of population above 65 years of age has increased from ~% in 2015 to ~% in 2018 and is expected to triple to ~% by 2050, leading to higher demand for maintenance medicines in the country. The per capita drug expenditure in the country has also increased from USD ~ in 2014 to USD ~ in 2019.

In 2019, there were ~ pharmacies in Vietnam including drugstores, hospital dispensaries and drug cabinets of commune health stations. The number of pharmacies increased at a CAGR of ~% over the review period 2014-2019. On the basis of revenue, the industry grew from USD ~ billion in 2014 and crossed USD ~ billion in 2019, witnessing a CAGR of ~%. The medicine retail channel through pharmacies accounts for approximately ~% of the total pharmaceutical market in 2019. In the recent years, the industry has witnessed a growth of modern pharmacy chains. Most pharmacy chains in Vietnam are currently focusing on the southern region, particularly Ho Chi Minh and neighboring provinces. These pharmacies offer a wide portfolio of products ranging from Pharma to FMCG.

By Market Structure: The presence of Organized Pharmacies is low in Vietnam in comparison as these chains have recently started expanding. The unorganized market dominated both in the number of stores and revenues as of 2020.

By Region: Vietnam can be classified into three regions namely northern, southern and central. The southern region, particularly Ho Chi Minh & neighboring provinces, accounts for the highest number of pharmacies as well as industry revenue due to concentration of pharmacy chains as well population. The remaining revenue is contributed by the northern & central regions.

By Type of Product Category: Prescribed Medicines contributed the maximum revenue share in the total market in 2020. Organized Pharmacies are however starting to focus on Non-Pharma Products as well due to higher margins and in order to expand their product portfolio.

By Type of Drug: Generic Drugs accounted for maximum industry revenue in Vietnam in 2020. Generics are easily available and mostly prescribed by the doctors as well since majority of the people belong to low/medium income groups. The domestic drug manufacturers are also focusing on production of generics. 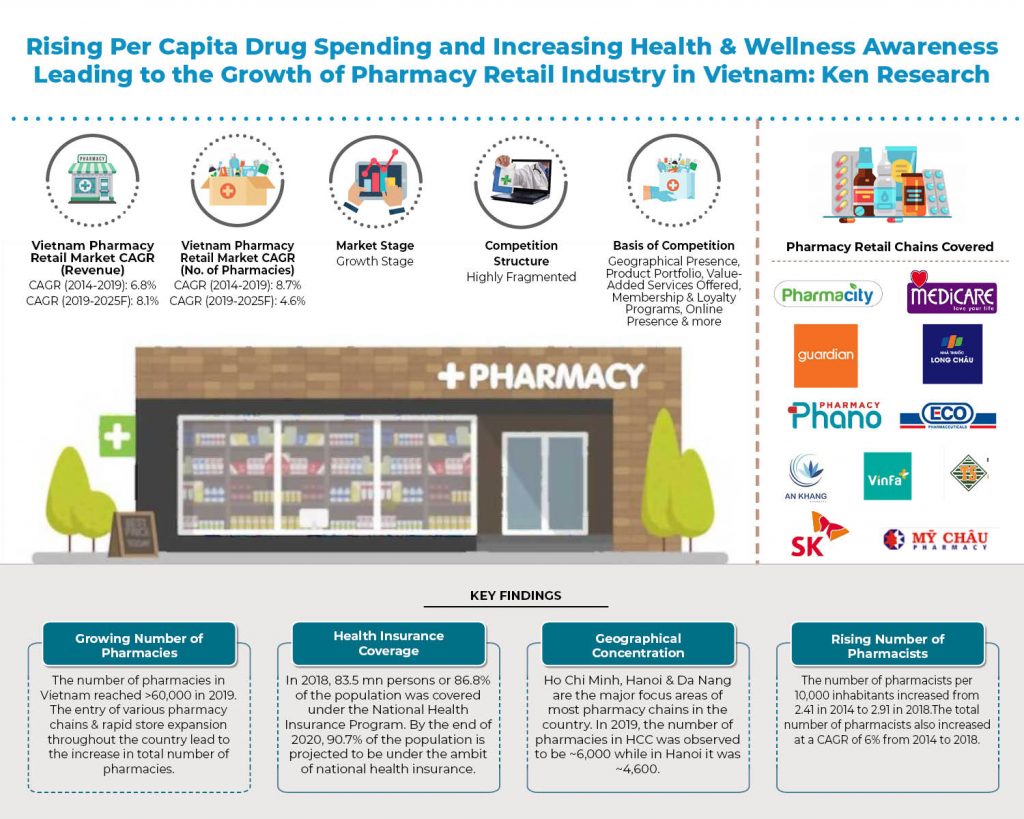 By Therapeutic Areas: Drugs for cardiovascular diseases were most sold in pharmacies across Vietnam in 2020. Anti-diabetic, pain relief/analgesics, anti-infective & respiratory drugs were also largely demanded. NCDs accounted for ~% of the total deaths in Vietnam in 2018 and are leading higher drug sales across various therapeutic classes.

Rising Per Capita Drug Expenditure: Due to rising health awareness and prevalence of communicable & non-communicable diseases, the per capita expenditure on medicines is also consistently increasing. The per capita drug spending increased a CAGR of ~% over the period 2014-2019, from $ ~ in 2014 to $ ~ in 2019.

Health Insurance Coverage: The number of total population participating in the national insurance program reached ~ million, accounting for ~% of the population in 2018. The coverage is further expected to increase to ~% of the total population by the end of 2020.

The Vietnam Pharmacy Retail Market has a presence of ~ pharmacies as of 2019. The market has a mix of chain and independent pharmacies with majority of pharmacies being independent or standalone. Organized pharmacies together accounted for ~% of the industry revenue in 2019. The top five pharmacy chains on the basis of number of stores are Pharmacity, Long Chau, Guardian, Medicare and Phano Pharmacy as of November 2020. The competition in market is highly fragmented, with pharmacy chains accounting for a very small percentage of the total industry revenue as well as total number of stores. The organized chains are trying to establish a strong presence in the market by rapidly expanding their store network, offering various services such as integrating stores with latest technologies for better in-store experience, membership programs & loyalty schemes, special promotion offers and discounts, delivery services and more.

The pharmacy retail market in Vietnam is expected to reach at a value of USD ~ Billion by 2025 registering a CAGR of ~% during the forecast period of 2019-2025. The outbreak of Covid-19 pandemic stimulated the shift of customers towards preventive healthcare & over-the-counter products and growing the consumption for vitamins, dietary supplements and functional foods. Other factors as ageing population, rapid store expansion of organized pharmacies, increase in per capita drug expenditure and rising adoption of e-pharmacies is expected to drive the growth of the industry.

By Product Category (On the basis of Revenue)

By Region (On the basis of Revenue & Number of Pharmacies)

By Therapeutic Areas (On the basis of Revenue)

By Drug Type (On the basis of Revenue)

By Location (On the basis of Number of Pharmacies)

Trends and Growth Drivers in the Industry and Challenges Faced

Covid-19 Impact on the Industry, Future Trends & the Way Forward