You are at:HomeAutomotive Transportation and WarehousingVietnam Warehousing Market Outlook to 2022: Ken Research 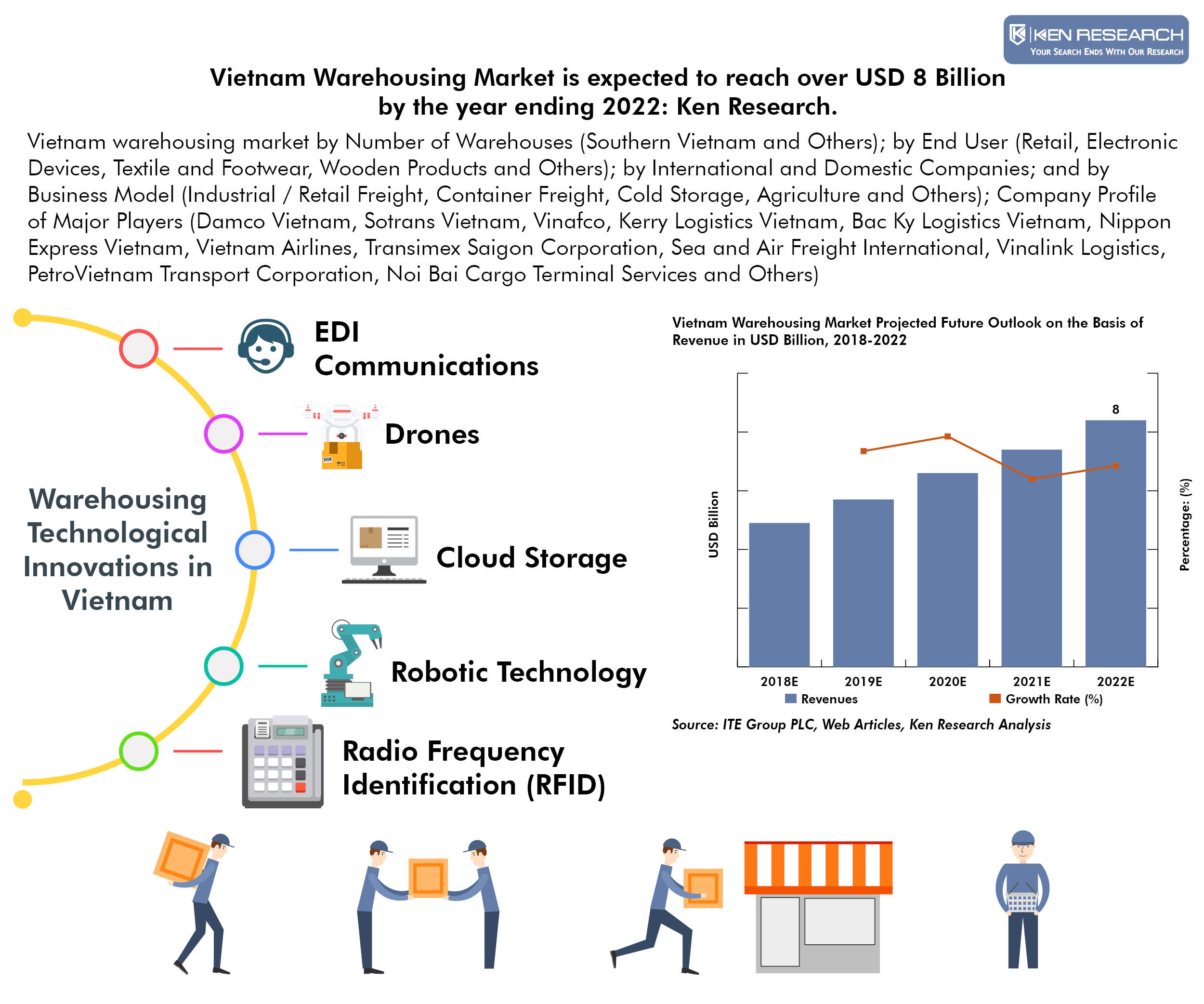 In terms of revenue generation, the warehousing market in Vietnam was evaluated at USD ~ billion in the year 2011. The market was witnessed to increase to USD ~ billion, thus displaying a growth of ~% in 2012. Over the past few years, rapid retail market developments have been evident in Vietnam with a continuous increase in organized retail or modern shopping across the country. The retail sales in Vietnam were evaluated at USD ~ billion in the year 2011. Expanding middle class and sizeable young population coupled with flourishing tourism in Vietnam has attracted a host of international brands, thus driving the demand for warehousing services in the country. Vietnam warehousing market grew to USD ~ billion in the year 2017 at a six year CAGR of ~% for the review period 2011-2017. “Just-in-Time” and “Just-in-Case” manufacturing processes are trending across global warehousing industry including Vietnam with a purpose of eliminating waste and inconsistencies which are hampering with overall productivity.

By Number of Warehouses

The Southern Vietnam region dominated Vietnam warehousing market with the presence of ~% warehouses in the year 2017 owing to proximity towards key destinations such as airports, seaports, major cities, main highways and borders. The Southern key economic zone is dedicated towards the development of commerce, exports, technology, services and telecommunications. Its areas include Ho Chi Minh City and the provinces of Binh Duong, Ba Ria-Vung Tau, Dong Nai, Tay Ninh and Binh Phoc. Other regions such as Northern and Central Vietnam collectively represented the remaining ~% warehouses in the country. Vinafco, Saigon, Newport, Mappletree, Draco and Indo-Trans are some of the major players situated in the Northern region whereas; PSCH, Thanh Hoa, Vinafco and Transimex are some of the major players situated in Central Vietnam.

The retail sector drives significant investment and value for Vietnam warehousing market by capturing revenue share worth ~% in the year 2017. Increasing purchasing power of Vietnamese consumers owning to significant rise in their disposable income coupled with growing internet penetration in the country has given a boost to the country’s E-commerce industry. The electronic devices segment followed retail with revenue share of ~% in Vietnam warehousing market in the year 2017 owing to the country’s improving economic performance and the increasingly modern lifestyles of its consumers. Major leading companies such as Samsung, Vina Electronics Co Ltd and Oppo Electronics Corp initiated several marketing activities to introduce their new products to attract Vietnamese consumers and to strengthen their reputation in the market. These campaigns were held in big cities such as Hanoi and Ho Chi Minh City. Other segments such as textile and footwear, wooden products and seafood collectively captured the remaining ~% revenue share in Vietnam warehousing market in 2017.

By International and Domestic Companies

International companies operating within the Vietnam warehousing market dominated by capturing revenue share worth ~% whereas, domestic firm captured the remaining revenue share worth ~% in the year 2017. Ho Chi Minh City is drawing interest from a number of global investors seeking office / commercial space, retail and hospitality investment opportunities coupled with a high rise in buildings and a number of shopping centers in the city.

The industrial/retail freight segment dominated overall Vietnam warehousing market with a massive revenue share of ~% in the year 2017. The rising industrial / retail sector in Vietnam has elevated the requirement of warehouses in the country majorly due to increasing demand for storage of processed packaged foods and beverages, as modern food retailing businesses expanded their operations in order to meet the consumer requirements. Container freight followed industrial / retail with a revenue share of ~% in the year 2017. The use of containers in export shipments makes the transport and goods handling easier and faster. The remaining revenue share worth ~% was collectively captured by cold storage, agriculture and others in Vietnam warehousing market in 2017.

The warehousing industry in Vietnam encompasses a mix of unorganized and organized players. The companies were observed to compete with each other on the basis of the size and location of the warehouse. The location of the warehouse has to be appropriate to the needs of the customer which reduces extra cost of transportation and increases time efficiency. Other important factors which influence the choice of warehouse are technologies/automation used in the warehouses; value added services, GDP-certified temperature and humidity-controlled environment and others.

Over the forecast period, Vietnam warehousing market is estimated to generate revenues worth USD ~ billion in the year 2018 owing to rising demand for warehousing services because of lack of adequate space in the ports and IDC and CFS. Rising cross border trade activities between Vietnam, Laos and Cambodia will support the warehousing industry in Vietnam for effective storage needs. The total turnover of border goods exchange between Vietnam and Laos and Cambodia is estimated to be around USD ~ billion by the year ending 2020, out of which total export turnover amounts to USD ~ billion and total import turnover is USD ~ billion. Vietnam warehousing market is expected to generate revenues worth USD ~ billion by the year ending 2022, thus increasing at a CAGR of ~% in the forecast period 2018-2022.