You are at:HomeAutomotive Transportation and WarehousingAutomotive and Automotive ComponentsFuture of Automotive Lubricant Industry in Malaysia: Ken Research

How Is the Automotive Lubricant Industry Positioned in Malaysia?

Expenditure on automotive lubricant and vehicle servicing is a part of the necessary household expenditure for a vehicle owner. Lubricants control friction and wear in the engine, protect the engine from rusting, cool the pistons, and protect the engine oil stored in the sump from combustion gases.

The automotive lubricant industry in Malaysia is at its Growth Stage, increasing with a CAGR (2014-2019) of 18.2% and 9.6% by revenue and sales volume respectively. The growth in the industry is driven by the presence of more than ~31 million vehicles on road and growing per capita income in the country. The formation of ASEAN free trade policy in 2015, led to the emergence of MNCs in Malaysia. The stability of ASEAN’s economy, availability of skilled labor, coupled with its pro-business climate, and improving infrastructure led to an increase in FDI by automotive OEM. In 2019, ~ vehicles including passenger cars, CV and motorcycle & scooters were produced in Malaysia. Proton, Peroduo, Nissan, and BMW are the major OEMs in the country. The industry is import driven and only ~30% of the total lubricants consumed were produced in Malaysia in 2019. Even though major players such as Castrol, Shell, and Petronas have a blending plant in Malaysia, they still have to import some specialized lubricants from different countries in Asia. 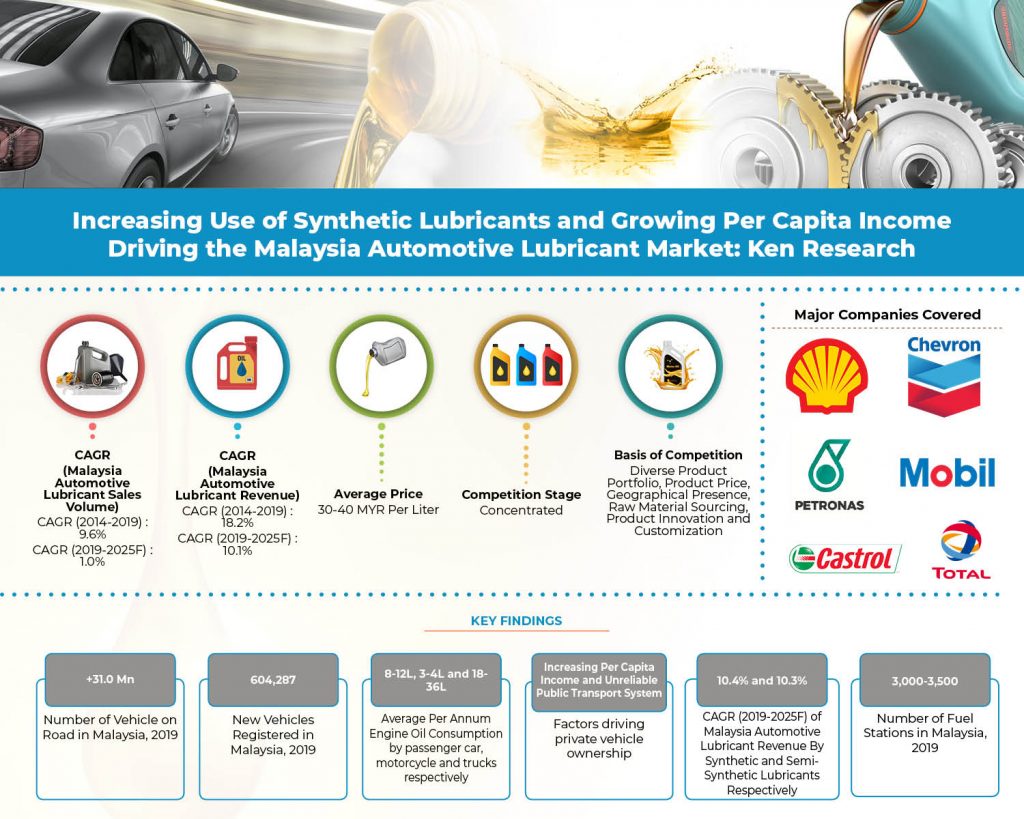 How Is Market Segmented?

By Sales Channel: Direct sales by companies constitute sales from fuel stations and sales to OEMs. The majority of sales are undertaken through indirect distributors network. Through distributors, the lubricants are majorly sold through service stations, garages, and OEM workshops as vehicle owners primarily depend on their mechanics for selecting and changing lubricants. Online sales contribute a very small share but with the increasing official presence of lubricant manufacturers on e-commerce platforms it is expected to gain traction in the future.

The competition in the industry is concentrated on the presence of 15-25 lubricant manufacturers. The industry is dominated by multinational oil producers such as Shell, Castrol & Chevron, and the national government-owned Petronas. Manufacturers are competing on the basis of product portfolio, prices, distribution network, brand value, and presence in different motorsports. Manufacturers are continually trying to evolve their product offerings in order to cater to the evolving demand. Manufacturers are venturing into the production of E-fluids to cater to increasing numbers of electric vehicles. Players such as Petronas and Shell have recently launched online sales on Lazada and Shopee Mall.

What Is The Future Of Malaysia Automotive Lubricant Industry?

Time Period Captured in the Report: –